Trevithick’s idea of making a locomotive must have originated in 1796, for in the three following years he made several working models, one of which is in the South Kensington Museum. The successful working of the models became an inspiration to him to proceed on a larger scale ; but, before doing so, he desired to prove that carriages could be propelled by causing their wheels to revolve.  In 1800 Trevithick, requesting Davies Gilbert to come with him and prove the case, procured the only one-horse chaise which could be obtained on hire; and, when on a stiff hill, removed the horse from the carriage, and the two friends gave their strength to the spokes of the wheels and the wheels progressed, ample proof for them that the adhesion of the wheels on an ordinary road was sufficient to cause the carriage to move when the wheels were caused to rotate; and on the strength of it, he commenced building England’s first passenger-carrying common road locomotive to be driven by the force of high pressure steam. The engine was completed in 1801 and made the first run on the 24th December, reported in the Falmouth paper as carrying several persons, amounting to at least a ton and half weight against a hill of considerable steepness, at the rate of four miles per hour.

General description of the engine:—The cast iron shell of the boiler was cylindrical with wrought iron ends, having an inside wrought iron furnace tube bent as the letter U, the fire box being at one end, the other end connected to the chimney; the cylinder was placed within the boiler.  The admission and exhaust of the steam to and from the cylinder was controlled by a four-way cock, worked by a rod from the cross-head with two tappets striking the lever up and down; the feed pole pump was also worked from the cross-head, the feed water passing through a heater, the heat being obtained from the exhaust steam on its way to the chimney; the blast from the bellows on the top of the boiler was conveyed by means of a pipe to the closed ash pit. The motion of the piston was transmitted from the cross-head by connecting rods to the cranks on the driving wheels.

The engine made its first run on Christmas Eve 1801. The illustration shows it going up Beacon Lane, now known as Beacon Hill. The best description of this run is given by Stephen Williams as follows:—” In the year 1801, upon Christmas Eve, coming on evening, Capt. Dick got up steam, out in the high road, just outside the shop at Weith. When we see’d that Capt. Dick was going to turn on steam we jumped up as many as could; maybe seven or eight of us. “Twas a stiffish hill going from Weith up to Camborne Beacon but she went off like a little bird. When she had gone about a quarter of a mile there was a roughed piece of road covered with loose stones; she didn’t go quite so fast, and as it was a flood of rain, and we squeezed together. I jumped off; she was going faster than I could walk and went up the hill a quarter or half a mile further and then they turned her and came back to the shop”. 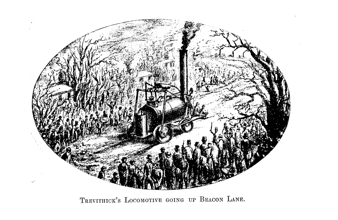 The Chapel Lecture Theatre is in 4 (building with an arced roof). Lecture Theatre A is in 2, Daphne du Maurier Building, – walk up the sloped path near the red post box and follow signs.

Note that parking is normally available and free if arriving after 5pm.